Getting Started with WebAssembly & Rust

Originally written for LogRocket and posted here with their permission.

This guide is an introduction on how to set up and work with a Rust WebAssembly environment. As for what you need to know, a basic understanding of Rust and web development should suffice.

I initially picked up Rust because of the fantastic work the team has done in supporting and pushing WebAssembly. Their official documentation is a great introduction for building an example project!

WebAssembly (also known as Wasm) is a binary instruction format that most browsers have started to support. This enables languages, such as Rust, C, C++ Go, etc., to be compiled and ran in a web browser.

To clear up some misunderstandings, WebAssembly is not a replacement for JavaScript (also known as JS). Rather, it should be thought of as a way of offloading computationally heavy tasks to a more suitable language. Another benefit of this is that existing projects and libraries can now be ported to the web without needing to suffer through rewriting them in JS and the performance hits that come with that.

For those interested in taking the Wasm specification outside the web, The WebAssembly System Interface (WASI) may be of interest to you!

With everything out of the way, we can start setting up our environment! Be sure to have the following installed on your computer.

Why do we need wasm-pack? To reference from Ashley Williams' Hello wasm-pack blog post,

wasm-pack is a tool for assembling and packaging Rust crates that target WebAssembly. These packages can be published to the npm Registry and used alongside other packages. This means you can use them side-by-side with JS and other packages, and in many kinds of applications.

For those that don't know, Rust crates are close to what packages and libraries are for other languages. Crates work directly with Rust's build system and package manager Cargo.

To create a new Wasm project, we can utilize the wasm-pack CLI. This should be familiar for those that create Rust projects through the cargo CLI.

The generated project is essentially a Rust library with boilerplate Wasm code. 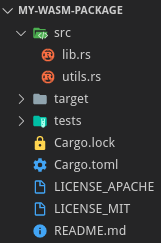 Looking at the commands available in wasm-pack, it's clear that there's a focus for creating and publishing npm packages.

Although this is great for projects that have bundlers (Webpack, Rollup, etc.), we're aiming for simple setup where we can import our Wasm binary in an HTML file. Thankfully, wasm-pack build has an argument to target other environments!

The web target is exactly what we want! Once built, the output will create a pkg folder with multiple files that serve as the glue code between Wasm and JS. By the end of it, our Wasm binary will be exposed through a JavaScript Module.

Running Wasm in the Browser

With the Rust code compiled to Wasm, we can begin going over how call it from JS. Start by creating a file called index.html in root of the project, and add the following:

For security reasons, browsers tend to not let you import local resources from file://. This prevents us from importing the Wasm binary, but an easy solution is to just start a quick webserver.

If you have Python installed, you can use one of the following commands for this:

We now have Rust code ready to run in a browser! Visit http://localhost:8000 to see it live. It should be a blank page with an alert. 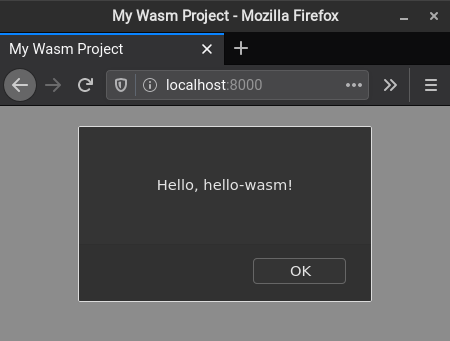 For the following code examples, you can edit the index.html & src/lib.rs files to play around with the new changes. Remember to build each time you edit your Rust code!

Now that you're familiar with building a project, it's time to go over how to work with it. By default, Rust doesn't directly have the ability to communicate with JS or Web APIs. This functionality is enabled through wasm-bindgen. The project itself consists of multiple crates and a CLI tool. We've actually been using its CLI through wasm-pack!

By importing wasm_bindgen::prelude::*, we're given powerful abstractions for talking to JS. Here are some I want to highlight:

Assuming you're editing src/lib.rs, the examples below show how to receive/return values with Wasm. Note that variables with an underscore (like _c) is a Rust convention for expressing that it's unused.

Once the project is built again, these functions can be directly used in our web page. Feel free to play around and print the values returned.

Expanding on what was explored above, enums and structs are a fairly simple export. Although there are some restrictions, the syntax should still feel like day-to-day Rust.

Now we can import the struct and enum directly into our JS code. Once a struct is instantiated, we can call its Wasm compatible methods.

We've provided an output image of the script below to better show how these types work. Notice how the enums and structs are represented in JS.

The wasm-bindgen crate gives us powerful tooling for talking to JS. However, there are no direct bindings for the JS standard or Web APIs. That's where web-sys and js-sys come in. Both crates provide ready made bindings that give us a standard interface to work with.

Of course, these crates don't cover everything and we need to create our own bindings for anything missing. A common example is wrapping over custom JS classes and functions. When you first opened src/lib.rs you might've noticed a binding was created for the alert() function.

To see how to create our own custom bindings, we'll first look over the JS code we want Rust to bind for.

On top of binding the Coordinates class, below are some examples on how to do the same for various JS functions.

The majority essential web APIs are provided and documented by the web-sys crate. After specifying what APIs we want, we can:

Since the list is extensive, we'll simply cover how to set up and use this create. Add the following to the project's Cargo.toml and then specify each web API you want to use.

Remember to take a look at the js-sys crate if you find yourself needing to import types and functions from standard JS.

Although we couldn't cover everything (Wasm has more to offer than can fit in just one blog post), I hope this guide was able to jump start your journey into WebAssembly! I highly encourage going though the wasm-bindgen docs to go over what we couldn't cover here. It covers more in-depth examples and important topics like Sending Arbitrary Data Between JS & Rust. Keep in mind that the Rust WebAssembly ecosystem is still growing and it's only going to get better from here!